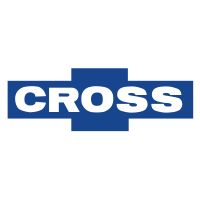 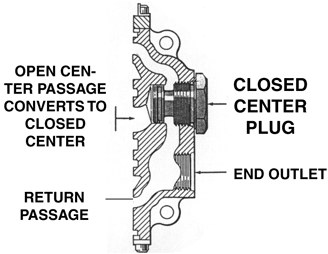 This option provides for conversion from open center to closed center by blocking the open center flow passage with the closed center plug as shown. It may be used in any standard Cross SA or BA valve featuring the conversion plug/power beyond machining in the BYD port.

To convert an open center valve, remove the short conversion plug and replace it with the closed center plug as shown. The relief on the handle end of the valve must be replaced with a no relief plug. (See table for part numbers.) Failure to replace the relief will result in chattering caused by the constant bypass of oil and will build excessive heat in the system. An outlet must be plumbed to the tank to dump the oil from the return passage.

Any restriction in the tank line of a closed center system caused by faulty quick couplers, a collapsed hose, etc. will damage the spool seals, washers and handle bracket (BA only) resulting in external leakage around the spool. Reversing the tractor valve so that the outlet rather than the inlet is pressurized would have the same effect. These possible problems must be remedied within the system.

In a closed center system, the neutral pressure sometimes causes leakage between the pressure core and the work ports enabling the cylinders to drift or creep. (Reworking the valve at the factory to a class 1A spool fit will minimize this problem. Valves with class 1A spool fit may be special ordered from the factory and are marked “1A” on the handle end of the valve body as well as on the box.)

Valves manufactured as closed center do not contain a relief and should never be installed in an open center system or converted to open center due to the possibility of personal injury or system damage!